By implementing the System & Soul Framework you'll be able to

Get coaching and leadership development that creates clarity and control for business leaders to grow a healthy, human-friendly company.

BOOK A DISCOVERY CALL GET YOUR ORG HEALTH SCORE

Growing a Business Is Hard

You want freedom and to build a business that fuels your goals - not stands in the way of them. You need clarity on your destination and how you'll get there so you can feel in control of your growth and your culture. 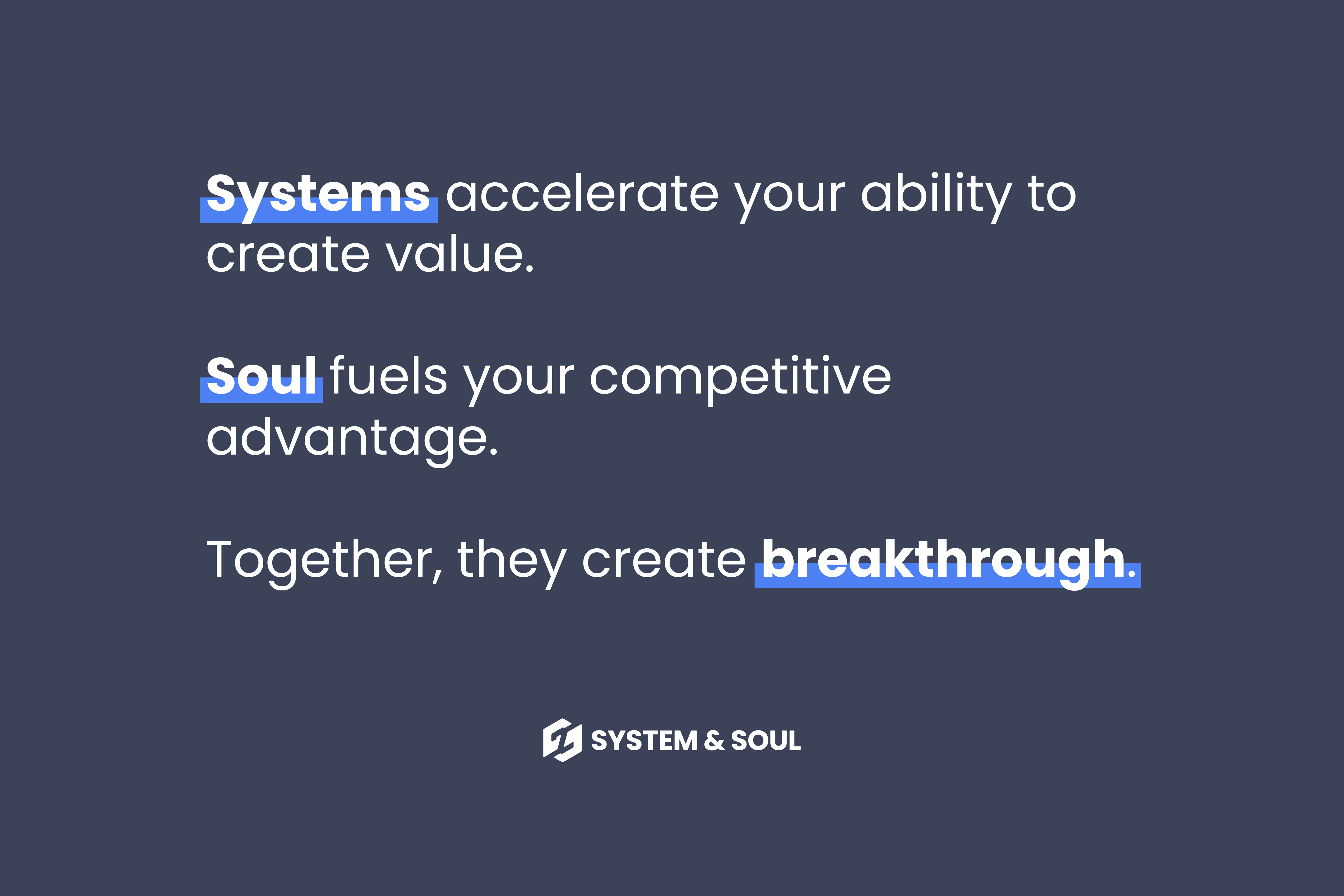 Create The Breakthrough You Need to Build a Better Business

It's hard to make real progress if you don't know exactly where you're going and how you'll get there. That's why we'll create a personalized Roadmap for your business in 31 days.

It can feel like the elements of growth are a mystery. We'll create the cadence and focus you need to uncover those elements for your business so you can grow at the right pace.

Google's Project Aristotle research found that psychological safety is one of the 5 key components of an effective team. I help senior leadership teams experience that in our sessions together.

Your people want to know they matter to you and not like a number. It's possible to grow bigger without turning people into numbers. We'll put language to who you are and how people fit. 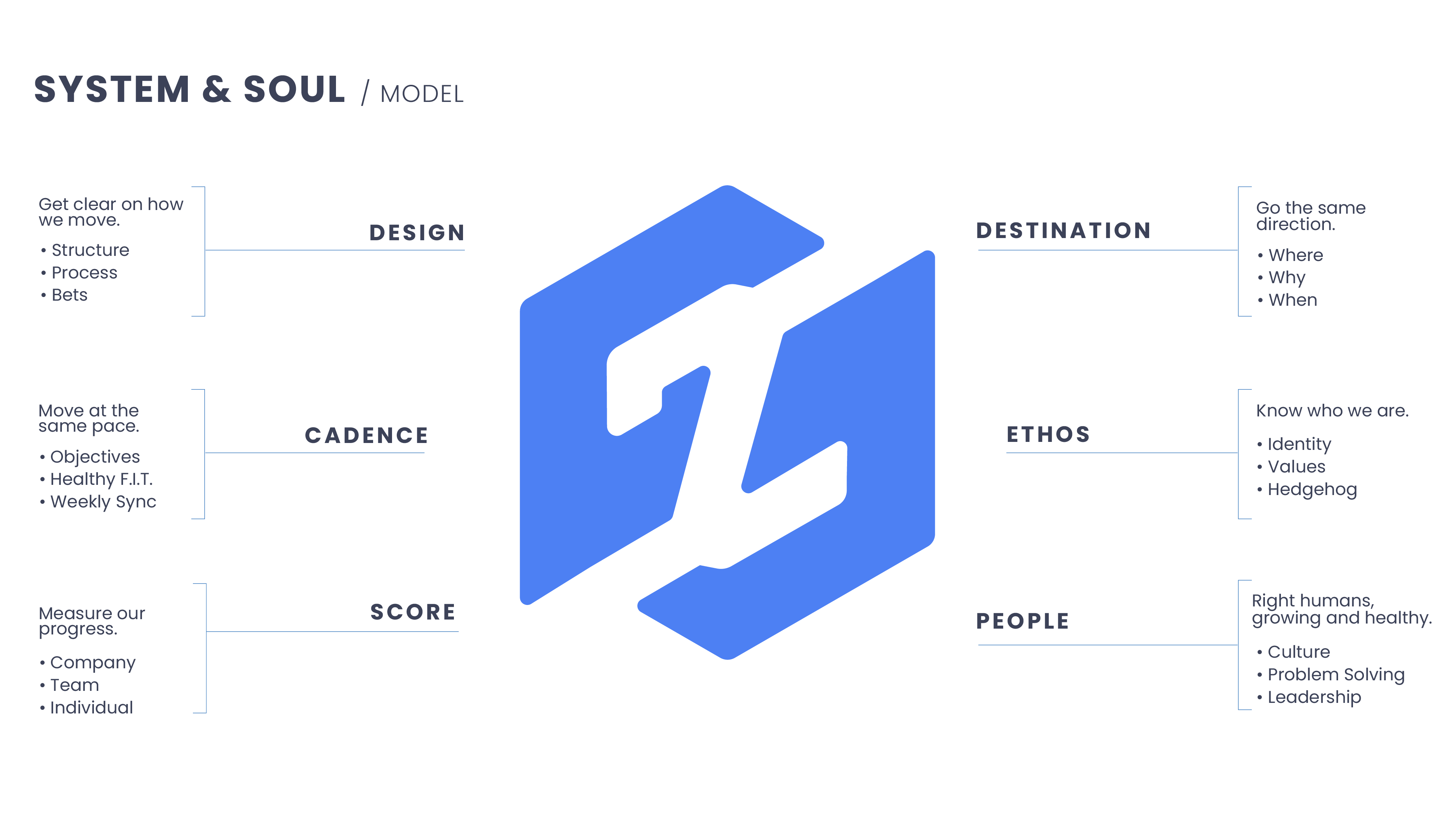 Take this free diagnostic along with the other members of your senior leadership team by sending them the link. 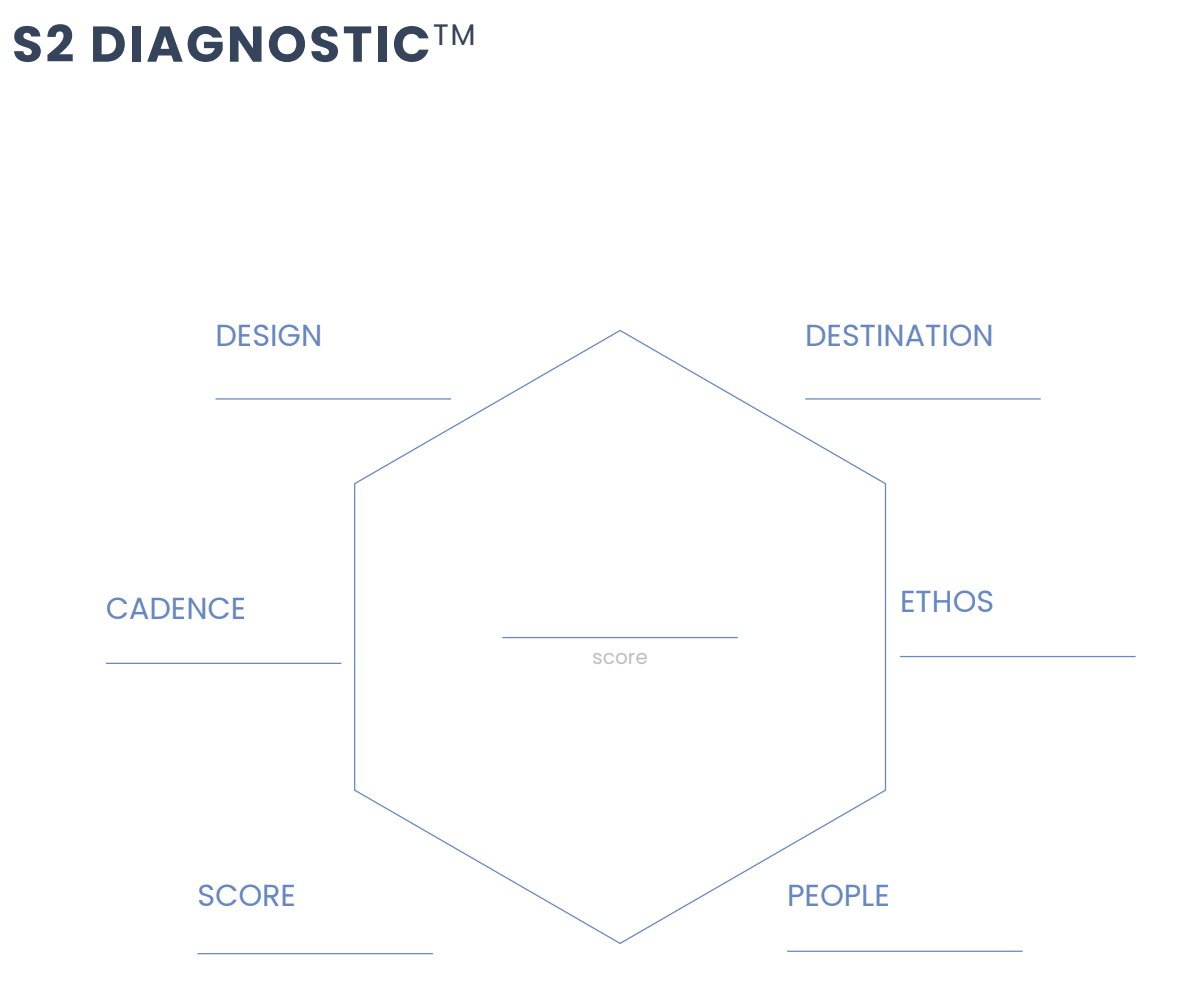 WHY WORK WITH ME 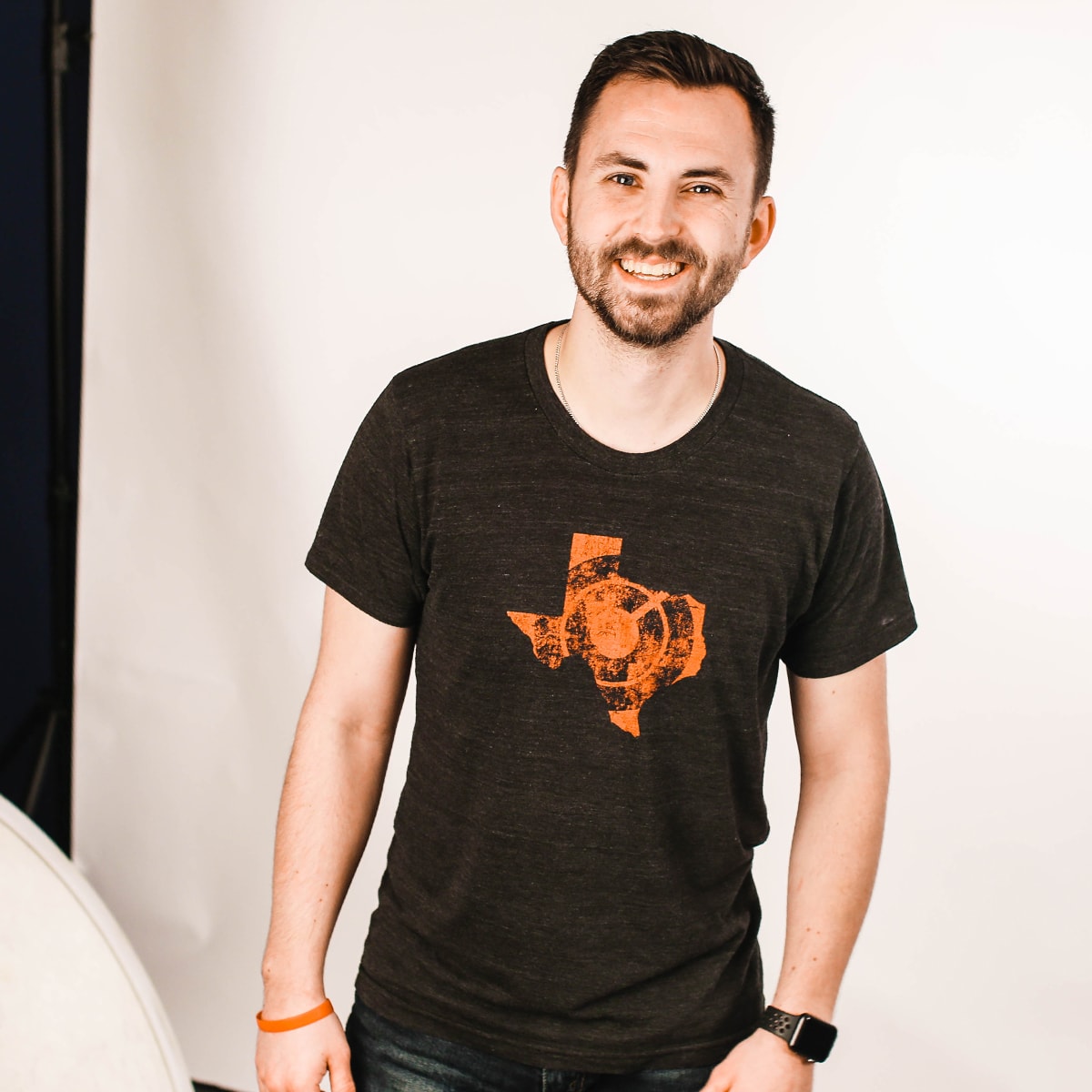 I grew up with an entrepreneurial father and mother and absorbed that spirit early in life. While in middle school, I started having my mom make an extra lunch that I would sell almost every day and would sell Pokemon cards for vending machine money.

As I got older I discovered a love for helping leaders because I saw that they often were expected to help others AND themselves. This lead me to learn as much as I could about what great leadership looks like and eventually led me to start my own company at 27, scale it to 6 figures in less than 3 years, and eventually sold it to another agency almost 5 years later.

After selling my company to another agency, I helped them go fully remote for the first time, expand their employment globally, and grow their revenue by almost double in 2 years during COVID.

During that time, I self-implemented a framework at that other agency and saw its impact was huge! However, I later found the System & Soul Framework and wished I had found it earlier because I would have been able to help those organizations achieve more growth with less pain.

I love helping leaders to be better and gain clarity in a safe space as they chase their goals and discover who they were created to be. I genuinely believe this is a core purpose for why I’m on this earth and want to bring out the best in as many leaders as I can!

"Kenny brings a ton of energy and tremendous focus to every conversation. He is the rare coach who elevates everyone in the room and has an uncanny ability to ask tough questions that move the conversation forward (even when it is an uncomfortable topic). I highly recommend Kenny for his facilitation and coaching skills, deep knowledge of all things digital marketing, and for his authenticity and integrity."

"When I met Kenny, he kept me on my toes as his company's facilitator because he was so well versed in how to maximize results using an operating system. He stuck to that system to the letter, knew how to ask the tough questions and encouraged his leaders to lean into the discomfort to get out the best results. He's a phenomenal facilitator who is skilled in helping people get results. Anyone who hires Kenny will be hiring the best!"

"I have had the pleasure of working with Kenny in the web design and marketing industry for several years. His practical insight and technical abilities have helped him launch businesses, grow businesses, and help others achieve a healthy and sustainable work-life balance. Kenny is a natural leader with an uncanny ability to encourage, motivate and inspire others. He is hella funny to boot! I strongly recommend Kenny without hesitation. If you have the opportunity to work with Kenny, take advantage of what he has to offer. You won't just gain a partner, you will gain a lifelong friend!"

"Kenny is a world-class human being and coach. He's uniquely gifted to both help a leadership team build better systems and help them infuse their culture, values, and gifts in their business. His experience as a founder, his intuitive nature, and ability to capture the whole picture while seeing the small steps that make it up is truly what everyone needs in a great coach."

"Kenny's work ethic, ability to inspire, and attention to detail are what separate him from other great leaders. He set the bar that I will continue to measure myself and others against, while I was under his tutelage. Kenny was able to perform at a very high level in the multiple roles he took on as a client-facing coach and internal manager. He is the work world equivalent of former NBA point guard Magic Johnson - an unselfish and highly skilled operator who can run the floor while making everyone around him better."

"Kenny was an integral part of helping us launch our nonprofit well. He not only helped us with many technical parts but also helped us understand our story and how we can relate well to our clients. It is this clarity that has helped us to reach our audience and quickly engage them in our services. Kenny has a wonderful balance of vision for where we want to go and expertise for how to get there."

"Kenny's good nature, warmth, positive attitude, and sense of realism are excellent traits in a leader, facilitator, and coach. He truly sees the importance of having a work management system that can support business goals and also genuinely values and respects employees and their efforts. I reported to Kenny while working at Web Canopy Studios, both in production meetings and 1:1s. I appreciated his sincere, down-to-earth approach to leadership and his value of employees as 'whole people' who had other priorities -families, hobbies, and other passions- in addition to work. He regularly met people, whether staff or clients, "where they are," which provided an excellent starting place for projects. Kenny offered unfailing support for people while also holding them accountable, which is a challenging balance. Kenny is a good coach with solid interpersonal skills and high emotional intelligence who can inspire people to get done what needs to be done."

"I worked with Kenny over 14 months and let me tell you, this guy has it figured out. He is timely and understands business and meeting clients where they need to be met would recommend Kenny a million times over. He is a pro's pro! His attention to detail is unmatched."

"I have had the pleasure of working with Kenny since 2020. He has been a real rock for myself and our organization. Kenny is a natural with Coaching and helping you realize your own worth and capabilities. His insight and ability to lead have allowed me to understand the fundamentals necessary to be successful with our web presence and our marketing efforts. He has facilitated many meetings with our teams and has proven to be an asset to our organization. If you have the opportunity to consult and work with Kenny, take advantage of what he has to offer."

"Kenny is a perfect example of a true strategic thinker and a natural leader. Versatile, knowledgeable, extremely intelligent, and with a passion for results — I had the pleasure to witness these qualities firsthand in several projects while working with him. His empathetic and charming personality allows him to engage and bond with people effortlessly, unveiling the challenges that need to be addressed and quickly tackling these with a well-thought plan through coaching and leadership with a vision. I personally learned a lot from Kenny, as a person, as a co-worker, and as a leader, and I couldn't recommend him enough if you're looking for a facilitator to help you unlock true personal and professional growth."

"Kenny is great to work with and really has the best interest of you and your business at heart. Kenny takes the time to listen and decipher the want from the need; he offers support, guidance, knowledge, and critique (when needed) along the way. Kenny brings years of experience as a business owner and marketing professional to the table."

"Kenny stewarded me through a variety of changes and was able to coach me through with video instructions, resources and one on ones. It was very helpful."

We'll Go Through 3 Phases Together 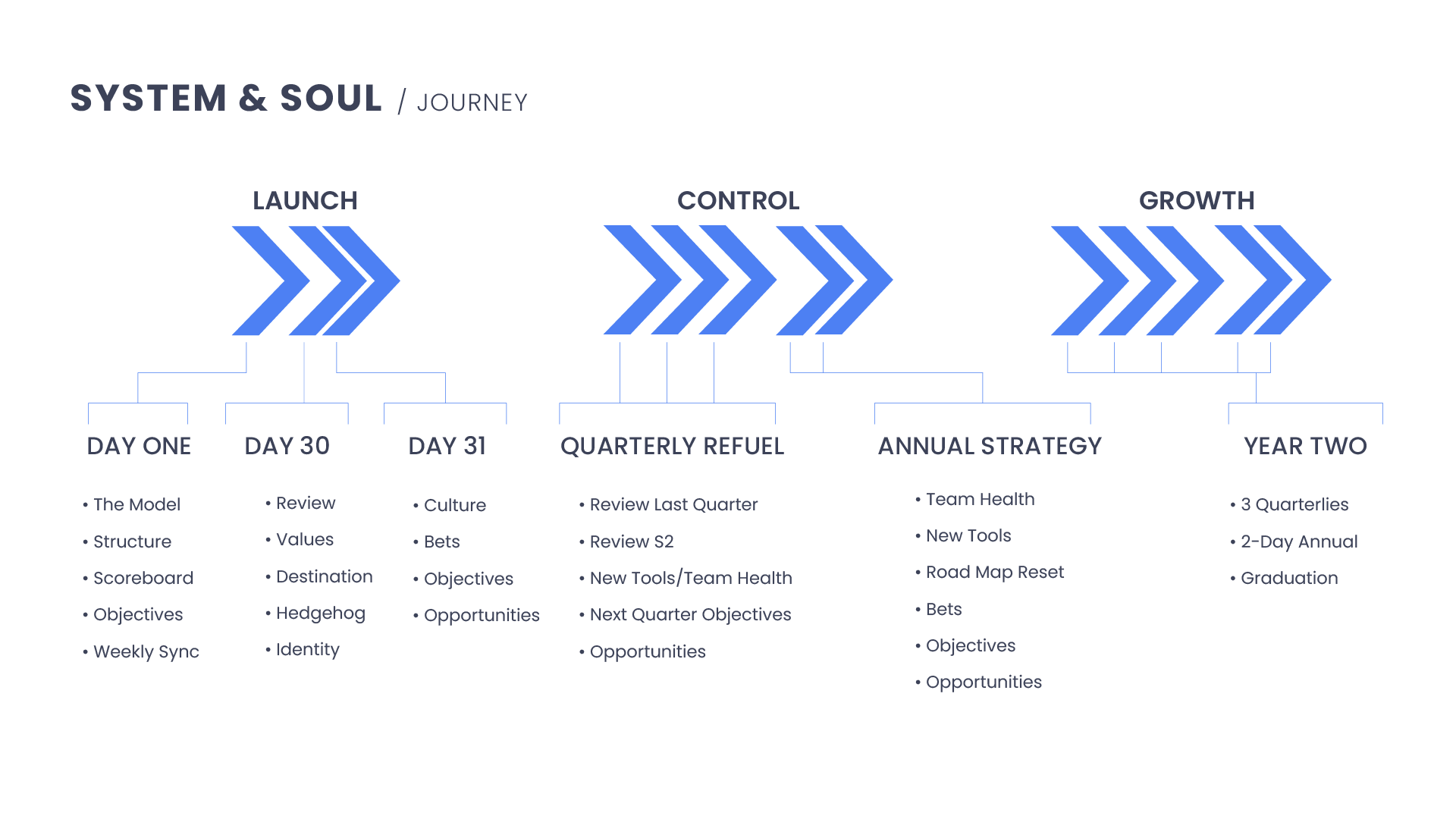 How To Get Started

During this call, we'll explore your high-level goals and obstacles and if System & Soul is the right fit for you and your organization and if any other coaching is needed.

I'll meet with your entire senior leadership team to learn more details about the state of the organization, share a bit about myself and my background, and walk through the System & Soul Model.

Your journey towards breakthrough starts with Day One of 3 full-day sessions designed to get your senior leadership the clarity it needs to make real progress in just 31 days.

Pick The Option That's Right for You

Implement the foundational Clarity Tools and have a Certified Coach run your Quarterly Refuel Sessions.

Below are the sessions:

Get a Certified Coach for all of your sessions + 2 hours of monthly coaching calls for any of your senior leaders.

Get in touch for a custom quote

We'll map out what kind of call frequency and plan is right for you.

While any organization can and would benefit from System & Soul (S2), it's been found to be ideal for companies with $2 million or more in annual revenue and 10+ full-time employees.

What industry is S2 best suited for?

System & Soul (S2) is industry-agnostic because it is a framework instead of being a specific method of industry operations or playbook.

Will this work for non-profits?

The short answer is "yes!" In most cases, there is very little difference in how the System & Soul (S2) framework is applied in non-profits. The main difference can come from how involved the board of directors would like to be or if the operating senior leadership team is empowered to make decisions with relative autonomy.

How is S2 different than EOS?

EOS's strength is in creating a strong system of processes and procedures to scale your company. However, the problem with focusing on systems in a silo is that we neglect the people that make those systems work. That's where System & Soul (S2) is a great evolution from EOS in the lineage of business frameworks.

System & Soul (S2) is the only business framework built on the humanity of the organization.

For a one-pager comparison of the two frameworks for yourself or your team, click here to download.

Do you have a guarantee?

Yes, I do! For any of the System & Soul (S2) sessions, I guarantee you'll receive value or you don't pay (or *refund if you pre-paid)! 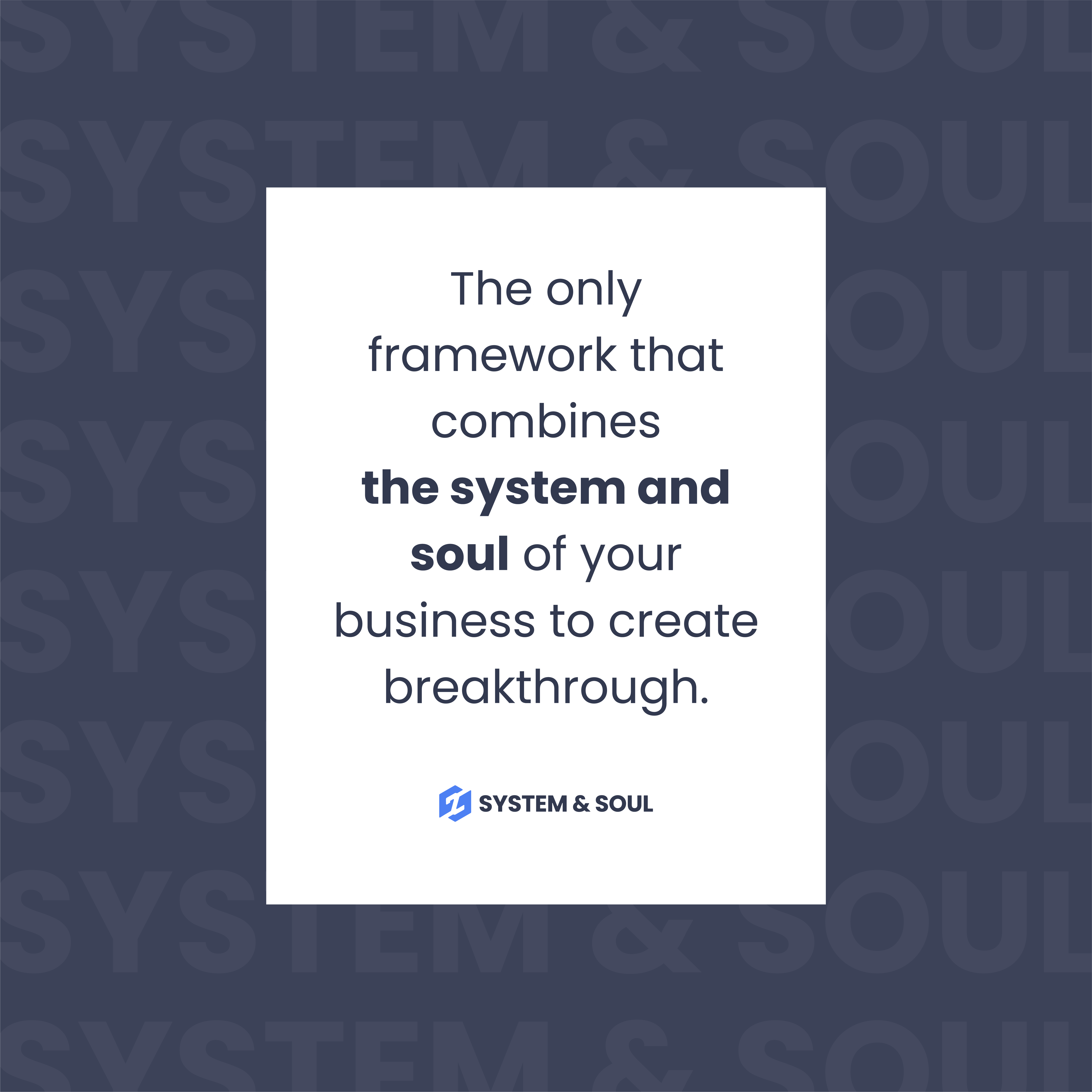