The Awesome Power Of Belief In People

There are few things that we can do for another human being that are as impactful as believing in them. I've recently been the recipient of such belief during the launch of my new web and design compa

Belief is a strange creature. It can cause us to stand resolute when everything around us says to run away. It can also cause us to move forward when it would be far easier just to stay where we are.

I'm not talking about your religious faith, but belief in another's success. There are few things that we can do for another human being that are as impactful as believing in them. I've recently been the recipient of such belief during the launch of my new web and design company and I want to share the impact it's had on me in the hopes it will inspire you to believe in someone around you.

[Tweet "There are few things that are as impactful as #believing in someone."]

A month ago, the job I believed to have been my dream job was taken from me. My 90-day trial period was up and the company didn't feel I was a fit for them. I was devastated!

I felt like I had finally arrived when I got this job. It was the start of a new career and it felt like I was in a place that was a great fit for who I was and what I wanted to do. Little did I realize what chain of events that loss would start.

I spent several days wondering what I was going to do, stressed out with how I was going to feed my wife and three kids, and generally feeling like a failure. But, those feelings started to turn after a conversation with a close friend and mentor.

One night, I was really struggling with my circumstances, and so I reached out to a man who has been a significant part of my life -- Corey Hooper. Some of you might recognize that name as my co-author on last year's post on 3 Ways To Lead Like William Wallace. Corey is a pastor and a bit of an entrepreneur himself.

During our conversation, I vented all of my frustration, fear, and doubt about my lack of job and if I was actually qualified to do anything meaningful. I told him that I had considered starting my own web design business, but was doubtful that it could ever take off.

It was then that he shared how much God loved me and my family and that His desire is to provide for us. Something I needed to be reminded of. But then he started to encourage me by telling me about the qualities he admires in me and the reasons why he believed I could be successful at whatever I set my mind to.

I know what you're thinking. "That's some major hyperbole. He couldn't have meant that. He just wanted you to feel better."

He did want me to feel better, but he was as sincere as you can get -- and I knew it.

[Tweet "#Belief causes us to move forward when it would be far easier just to stay where we are."]

I don't know if I ever will run a Fortune 500 company, but his words stuck in my head and my heart. I felt a sense of empowerment. I didn't feel as hopeless and discouraged. Maybe I could do meaningful work and provide for my family.

Taking The Next Step

Over the next few days I began to formulate how I would structure my business; services, rates, a name.

Towards the end of that same week, I was having a conversation with another pastor friend of mine that works with Corey about how things were going at the church. They are in a period of transition with their staff and facility.

During the conversation, I told him about my idea to launch my own web design company and asked for his advice. He had co-founded and run his own media production company for 20 years as well as being a pastor and I figured he'd have some practical insight for me. While he did have some advice, he was more interested in how I could help them with the church's website.

After answering a few questions about what I could do for them and finding out what they are looking for, we set a time to meet the following week before I was to leave town to spend almost a week with my sister and her husband.

I expected the meeting to be very shallow in regards to details. It was far from that.

I had already done some research into a potential design before our meeting and showed him the concept. He loved it!

We spent nearly an hour going over all the details of what they would need, how each piece would work, and discussing functions they'd like to have on the site. After our meeting, we set another appointment for me to come back during their next staff meeting.

The next week, I presented the concept and layout to all three pastors. We met for almost three hours! I left with a very positive feeling.

I have played soccer since I was four years old. I love to play, watch, and talk about it.

I am a part of a co-ed team that plays indoor soccer near my home. We have had a core group of players but usually have to find new players every season to make sure we have subs and hopefully that make us better too.

Recently, we added a co-worker of one of my teammates. Her boyfriend also joined our team and so far they have both made a very positive impact.

The guy's name is Akil and he co-owns his own gym, AD Fitness, where he is a personal trainer. He and I initially hit it off because of our love for and study of fitness. It wasn't until I asked if I could occasionally use his gym that our friendship started to develop.

[Tweet "#Belief can cause us to stand resolute when everything around us says to run away."]

You see, when I wasn't offered full employment after my 90-day trial period, my wife and I cut all non-essential expenses. One of those was my membership at Premier CrossFit. And while I have almost all the equipment I need to do my workouts, I don't have a squat rack to hold my barbell.

That may not seem like a big deal, but I don't like having to clean the bar up to my shoulders every time I want to do an overhead movement or do squats.

So, I asked Akil if I could drop in occasionally and use his equipment for my heavier lifts. He not only said yes immediately, but told me that I could train people there if I wanted. At this point, he had only known me for maybe five weeks. I was blown away.

During a class recently, I noticed one of his clients was struggling with burpees (who doesn't?! they suck!). I saw that she was making a mistake that I had made and had only corrected when one of my coaches showed me a more efficient method of doing them.

Akil was instructing another client at the time so I asked her if I could give her some advice I felt would help her. She said yes and I showed her what my coach had showed me. She made the adjustment and was grateful for the tip.

Afterwards, I felt that I had overstepped my bounds and immediately told him that I had offered advice to one of his clients. His response shocked me and has stuck with me.

"I'm not worried about it. I trust that you know what you're talking about."

Fast forward a bit and I'm about to start training my own clients at his gym and partnering with him and the other owner to grow the business. Something I would never have seriously considered if it weren't for Akil's belief in me.

This week, Akil sent me this picture of himself and his now fiance, Megan. 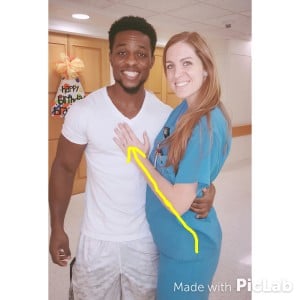 He proposed on Tuesday of this week and wanted to share the big news with me. After saying congratulations, he gave me a response that is one of the most sincere and encouraging statements anyone has ever said to me. 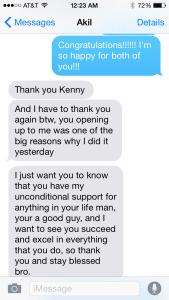 There have been other people to give me encouragement and support over the last month, but these two men have stood out because of the stories I've shared with you.

I am now in the midst of launching my web and design company -- phnx21designs. I'll have my logo in the next several days and hope to have a basic website up before long. In the meantime, you can go to the site, phnx21designs.com, and sign up to be notified when the website goes live or email me to discuss a project for which you'd like a quote.

[Tweet "#Believe people into a bright and hope-filled future!"]

[reminder]What major step have you taken in your life because someone believed in you?[/reminder]

How to Take Control of Your Life

Have you ever felt out of control? There are some critical areas of our life that, if we'll take them back, we will regain the control we need and...

As I've been getting my new company, PHNX21designs, off the ground, I've been thinking a lot about money. How I view money and even more how others...

How To Wage War On The Hurts Of Life

Get notified of new growth insights

Be the first to know about new organizational, team, and personal growth insights from me.